The image below shows a grey-scale anaglyph before and after disparity has been adjusted. In this case, the original stereo pair was shot in such a way that the perceived depth of all pixels was behind the convergence plane. The Disparity Adjust node was used to apply a non-linear compression to the disparity values, pulling the most distant pixels towards the viewer, and then shifting the perceived depth of the entire scene towards the viewer so the foreground objects lie nearer to the viewer than the convergence plane. 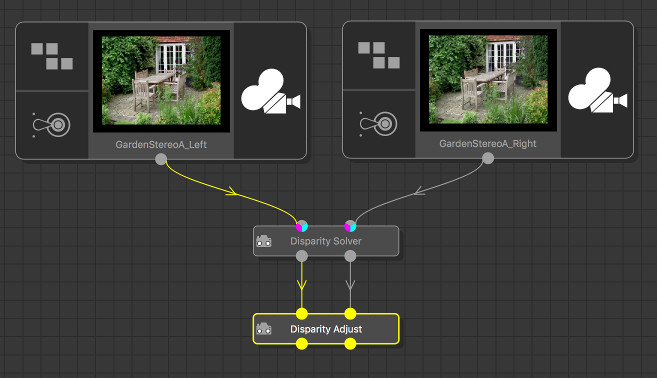 Disparity can be adjusted using several tools: Most straightforwardly, the Disparity Scale and Disparity Offset parameters can be used to scale and/or offset the disparity at each pixel. Scaling disparity corresponds to multiplying the disparity vector at each pixel by the scale factor, and results in the perceived depth of the scene being increased (for scale factors greater than 1.0) or decreased (for scale factors less than 1.0). Offsetting disparity corresponds to adding a value to the horizontal disparity component at each pixel, and has the effect of moving the perceived depth range forwards (for positive offsets) or backwards (for negative offsets) relative to the convergence plane. The following diagram illustrates these manipulations, showing a top-down view of a scene with left and right-eye cameras and a convergence plane:

As disparity is adjusted, the corresponding image data is updated to reflect any changes that are made. The Adjust Mode menu controls which of the left and/or right eyes is updated. When choosing either the left or the right-eye alone, the image for the other eye will remain unchanged. Selecting Adjust Both Eyes will cause both the left and right-eyes to be updated.

The Render Mode menu can be used to display either a grey-scale or colour anaglyph in the Cinema window if required. This can be used to quickly evaluate the effect that changes to disparity has on the final image.

The image below shows disparity histograms for the left-eye in three separate frames in a clip. This clip was shot with a converging camera rig, and the first frame illustrates that there are scene elements distributed fairly evenly in front (i.e. nearer) and behind (i.e. further away) the convergence plane, at which the disparity of a pixel will be zero. There are larger peaks at positive disparities which indicate that more of the scene is further away from the camera than the convergence point.

The middle histogram is taken from later in the clip. From this, it can be seen that almost all of the elements in the scene have now moved further away from the camera than the convergence point. Finally, the right-hand histogram is taken from the end of the clip, where there is now a clear separation between scene elements much nearer to the camera than the convergence point, and other elements further away.

Note that when viewing the disparity histogram for the right-eye, the direction of disparity will be reversed, so positive disparity values become negative and vice-versa.

The vertical range in the disparity graph can be adjusted by enabling the Use logarithmic scale button. This can be useful to see the distribution of less frequent disparity values more easily in the histogram graph.

The Disparity Warp Graph can be used to apply creative adjustments to the disparity and perceived depth in the shot. The graph is only enabled when viewing the left-eye image of the stereo pair, and shows two histogram plots: The red histogram along the horizontal axis displays the input disparity histogram (i.e. the disparity map from up-stream, before any adjustments have been made). The green histogram on the vertical axis shows the results after adjusting the input disparity map using the warp curve, which is drawn in white.

Note that the output disparity histogram on the vertical axis is only affected by the warp curve. The Disparity Scale and Disparity Offset parameters are applied afterwards and do not affect the values displayed in the Disparity Warp graph.

Initially, the warp curve is a straight line at 45 degrees passing through the origin point (i.e. the zero disparity point, which is drawn with black dashed lines).

The images below show an example warp curve in its default state on the left. In the middle image, the curve has been adjusted to pull pixels behind the convergence plane (i.e. those with positive input disparity) closer to the camera by decreasing their disparity values. Note that pixels on the convergence plane (i.e. those with zero disparity) have not been adjusted because the warp curve still passes through the origin point. The foreground part of the scene has not been changed either.

The image on the right shows how the curve has been used to move pixels in the foreground of the shot (i.e. those closer to the camera than the convergence plane, which have negative input disparity) further away from the camera by increasing their disparity values. Again, pixels on the convergence plane and those in the background of the shot have not been affected. 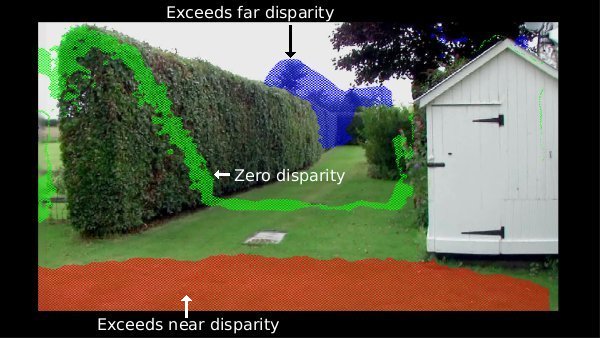 The Maximum near disparity parameter specifies the maximum allowable disparity at the near-plane (measured in pixels). When a pixel has a disparity that is larger than this (i.e. more negative when viewing the left-eye, or more positive when viewing the right-eye) it will be coloured using a red checkerboard pattern in the overlay.

The Maximum far disparity parameter specifies the maximum allowable disparity at the far-plane (measured in pixels). When a pixel has a disparity that is larger than this (i.e. more positive when viewing the left-eye, or more negative when viewing the right-eye) it will be coloured using a blue checkerboard pattern in the overlay.

The disparity violation overlay will also show areas of the image that have approximately zero disparity (specifically, those pixels with an absolute disparity value that is less than one pixel). These areas are shown with a green checkerboard and indicate the parts of the image that will be perceived to lie on the convergence plane when viewed by the observer.

The Viewer Distance and Screen Width parameters should be set to the viewing settings for which comfort will be estimated. For example, if viewing comfort is to be estimated for a projection screen that is 15 feet wide, and an observer sitting 10 feet away from it, those values should be entered into the screen width and viewer distance edit boxes.

Enabling the Show comfort violations option will display a false-coloured image in the Cinema window, ranging in colour from green (comfortable viewing) to red (uncomfortable viewing). These values are estimated by assuming the observer's interocular distance is fixed at 65mm, and measuring the angle at which the observer's eyes must reach in order to fuse the stereoscopic image at each pixel depth. When the fusion angle exceeds a value generally assumed to indicate visual discomfort, the Cinema overlay is coloured red.

The images below illustrate how adjusting the disparity in the stereo pair can affect viewing comfort for a scene. In the image on the left, the initial disparity values are large enough to cause viewing discomfort. The comfort overlay is shown inset at the bottom-left of the anaglyph image.

When disparity is adjusted, however, the disparity values for the scene are greatly reduced, and the comfort overlay turns green for most of the image. This indicates that the observer's eyes can more easily fuse the stereoscopic image under the described viewing conditions.

Current clip: The current left or right-eye clip that is displayed in the Cinema window.

Render Mode: The type of image that is generated when rendering into the Cinema window. The default option Output will produce an adjusted version of either the left or right-eye image. Grey Anaglyph and Colour Anaglyph will produce either a grey-scale or colour red/blue anaglyph.

Disparity Scale: The scale factor applied to all pixel disparities during rendering. This can be used to artificially increase or decrease the stereoscopic effect. When enabled, the C button indicates that the disparity scale factor is constant throughout the entire clip instead of being allowed to vary from frame-to-frame. When the C button is switched off, the disparity scale curve is available for editing in the Curves Editor.

Disparity Offset: The offset applied to all horizontal pixel disparities during rendering. This can be used to artificially move the perceived position of the scene forwards and backwards compared to the viewing surface (i.e. the computer monitor or projection screen). When enabled, the C button indicates that the disparity offset is constant throughout the entire clip instead of being allowed to vary from frame-to-frame. When the C button is switched off, the disparity offset curve is available for editing in the Curves Editor.

Pick Zero Disparity: Enabling this button and then clicking in the Cinema window with the left mouse button will automatically adjust the disparity offset parameter at the current frame in order to ensure that there is zero horizontal disparity at the pixel. This effectively ensures that the corresponding part of the scene is perceived to lie on the convergence place. The Disparity Violations overlay can be enabled to visualise which parts of the image currently have zero disparity.

Edit ROI: Allow the region of interest to be edited in the Cinema window using the left mouse button. Note that the ROI should be adjusted for both the left and right-eye clips without any disparity correction applied.

Show ROI: Display the current region of interest in the Cinema window.

Apply Correction: Disabling this option will revert the image in the Cinema window back to its original state, without any disparity adjustments applied. This can be used to help adjust the ROI for each clip. If this option is disabled, make sure to enable it again after adjusting the ROI in order to apply the disparity changes to the image.

The vertices and handles of the warp curve can be adjusted by clicking and dragging with the left mouse button. Holding the Control key whilst moving a vertex will allow its position to be moved horizontally as well as vertically. Holding the Control or Option keys whilst moving a Bezier handle will allow the left and right handles of a vertex to be adjusted independently.

Fit: Scale and translate the view of the Disparity Warp curve editor to ensure the disparity values for the current frame are visible.

Maximum Near Disparity: The maximum allowable disparity at the near-plane (measured in pixels). When a pixel has a disparity that is larger than this (i.e. more negative when viewing the left-eye, or more positive when viewing the right-eye) it will be coloured using a red checkerboard pattern in the overlay.

Maximum Far Disparity: The maximum allowable disparity at the far-plane (measured in pixels). When a pixel has a disparity that is larger than this (i.e. more positive when viewing the left-eye, or more negative when viewing the right-eye) it will be coloured using a blue checkerboard pattern in the overlay.

Viewer Distance: This edit box and menu can be used to specify the viewer distance used to estimate stereoscopic viewer comfort. This is the distance between the display screen and the observer who is viewing the screen.

Show Comfort Violations: When enabled, the Cinema window will display a coloured overlay that approximates how comfortably the stereoscopic image can be viewed by an average viewer. The overlay colours can vary from red in regions that are uncomfortable to view, to green in regions that can be viewed comfortably. The size of the display screen and the distance between the screen and observer must be set using the Screen Width and Viewer Distance edit boxes.

Transparency: This edit box controls the amount of transparency that is used to display overlays in the Cinema window.