The Match Camera node will automatically track and solve multiple moving cameras into a scene that has been surveyed photographically using the Photo Survey node.

This avoids the need to manually scale and orient each camera path to align it with the scene point cloud, as would be required if the movie camera was tracked and solved separately using the Camera Solver node.

The result of this process is a single scene representation containing a point cloud with photo cameras (from the Photo Survey node), and as many solved and aligned movie cameras as desired.

Feature tracking and camera solving occurs as a single process, and does not require any user intervention or manual feature tracking, although features can be tracked manually up-stream to assist the movie camera solver if required.

When surveying the scene using the Photo Survey node, photographs should be taken to cover as much of the scene viewed by the movie clips as possible. Whilst the solver used to position the movie cameras is able to operate with limited amounts of data, ensuring the Photo Survey point cloud contains many points that are visible to each movie camera will give the best results.

The screenshot below shows a scene surveyed using the Photo Survey node along with two movie clips that have been tracked and solved automatically into the same scene space: 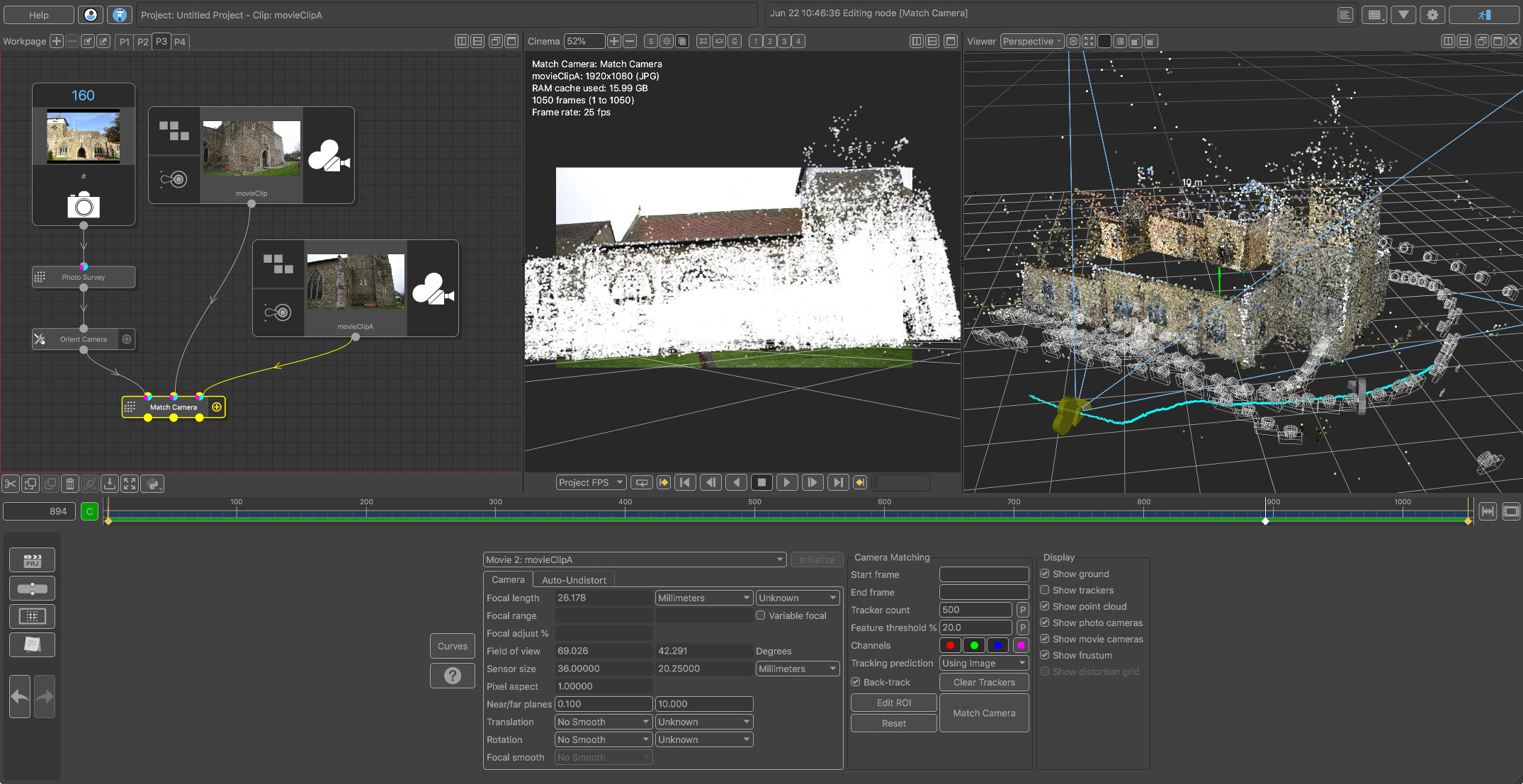 Once a photographic survey is available, the overall scene scale and orientation can be set once, if desired, using an Orient Camera node immediately below the Photo Survey node, as shown in the screenshot above. Note that this is not a required step, but may help to ensure the scene ground plane is positioned and scaled appropriately.

The survey photos and point cloud should be attached to the first input of the Match Camera node, as shown in the screenshot above. Each movie clip can then be attached to additional inputs.

Before a movie camera can be tracked into the scene, the photo collection database must be initialised. This generates the data that will be used to automatically locate the movie camera into the scene space, and may take a few seconds or a few minutes to finish (depending on the number of images used to survey the scene).

Note that the database need only be initialised once for each Match Camera node, but if the point cloud or camera data coming from up-stream is changed, the database must be re-initialised to ensure the movie cameras are matched correctly into the scene.

The camera and lens parameters for each movie clip can be viewed in the Camera and Auto-Undistort tabs (if automatic lens distortion correction is active).

Tracking is performed in several stages, the first being an automatic feature tracking process that identifies points in the movie clip that can be tracked from frame-to-frame.

Features will also be selected from the movie clip to try and locate the camera position within the scene generated by the Photo Survey node. Features that are matched will be displayed in the Cinema window, and the corresponding scene points highlighted in the Viewer windows.

Manually tracked features placed up-stream between the Match Camera node and the movie clip node will also be used during tracking to improve the solve. Note that it is not necessary to track any features unless required, but for certain types of scene, placing one or two user-tracked features in specific locations can be used to reduce jitter in the solve, particularly if the movie camera is viewing parts of the scene that were not particularly well covered by the Photo Survey node.

In order to get the most accurate estimate of camera motion, it is often important to account for any lens distortion present in the footage. This can be done in several ways:

Provided the distortion present in the footage is not too great, the third option can often provide an accurate result, and can be enabled by switching on the Estimate buttons in the Auto-Undistort controls.

Note that enabling automatic lens distortion correction can slow down the camera solver, especially when many different focal lengths are used by the cameras and all three parameters are being estimated.

After lens distortion has been removed, the camera's sensor size will be adjusted to account for the new image resolution.

Clip Menu: This menu allows the current clip to be changed. The first clip will always correspond to the photo collection and point cloud provided by the Photo Survey node. Additional clips are the movie clips that are to be solved into the scene.

Initialize: Initialise the database for the photo collection and point cloud. If the Shift key is held whilst clicking this button, the initialisation process will be performed in the background.

The camera controls contain information about the current movie camera.

Focal range: When Focal length is set to Initialised or Unknown, these edit boxes define the minimum and maximum allowable values of focal length.

Variable focal: When enabled, the camera focal length will be allowed to vary for each frame.

Focal adjust: When using focal lengths set from metadata, this value can be used to allow the focal length to vary slightly from the exact metadata values.

Field of view: The horizontal and vertical field of view for the current camera, measured in Degrees.

Sensor size: The horizontal and vertical sensor/film back size. To change sensor size, edit the camera preset values in the Clip Input node.

Near/Far clip planes: Adjust the near and far clipping planes for the current camera to reduce the number of point cloud points that are displayed in the Cinema window once the camera has been solved. Note that these values do not affect feature tracking or the camera solve, and are for display purposes only.

The Translation and Rotation menus can be used to specify various hints and constraints for how the camera is moving. The first menu is used to control the amount of smoothing that is applied to either the translation or rotation components of motion. Smoothing options are None, Low, Medium and High.

The second menu can be used to specify either a constraint on the motion (for example, 'No Translation'), or indicate that a hint should be used. Translation constraints are as follows:

Focal smooth: Specify how smooth the camera focal length changes are for cameras with a variable focal length. Options are None, Low, Medium and High.

Tracker count: The number of features that are automatically tracked from frame-to-frame in the movie clip. Decreasing this value may accelerate processing, but may also reduce accuracy. The P button will display a preview of the feature locations and their tracked positions for the current frame.

Feature threshold %: The threshold for the selection of features that are picked from a movie frame and matched to the point cloud to locate the camera in the scene. The P button will display preview points in the Cinema, and the corresponding cloud points will be highlighted in the Viewer windows.

Channels: These options can be used to specify the red/green/blue image channels to use for feature tracking, and also how attached masks are to be used.

Tracking Prediction: The method used to predict tracker motion from one frame to the next:

Back-track: When enabled, features will be tracked from frame-to-frame in the movie clip between the start and end frames and then back again, ensuring the tracking points exist in as many frames as possible. This will increase processing time but will also increase the length of feature tracks and improve overall accuracy.

Clear Trackers: Clicking this button will remove all trackers from the node.

Reset: Reset the matching parameters to their default states.

Match Camera: Start the feature tracking and camera solving process for the current movie clip. The Cinema window will be updated to display intermediate results after points are detected and matched in each image. If the Shift key is held whilst clicking this button, the matching process will be performed in the background.

Show ground: When this is enabled, the ground plane will be displayed in the Cinema and Viewer windows.

Show trackers: When this is enabled, tracking points generated in the node will be displayed.

Show point cloud: When this is enabled, the point cloud provided by the Photo Survey node will be displayed in the Cinema and Viewer windows.

Show photo cameras: When this is enabled, the camera positions provided by the Photo Survey node will be displayed in the Viewer windows.

Show movie cameras: When this is enabled, the camera path and frustum for the current movie camera will be displayed in the Viewer windows.

Show frustum: When this is enabled, the near/far clip planes for the current movie camera will be displayed in the Viewer windows.