The Photo Mesh node can be used to convert a dense point cloud (generated by the Photo Cloud node) into triangular mesh, complete with texture, normal, occlusion and displacement maps. These texture maps are attached to the mesh and passed down-stream where they can be exported using the Scene Export node. 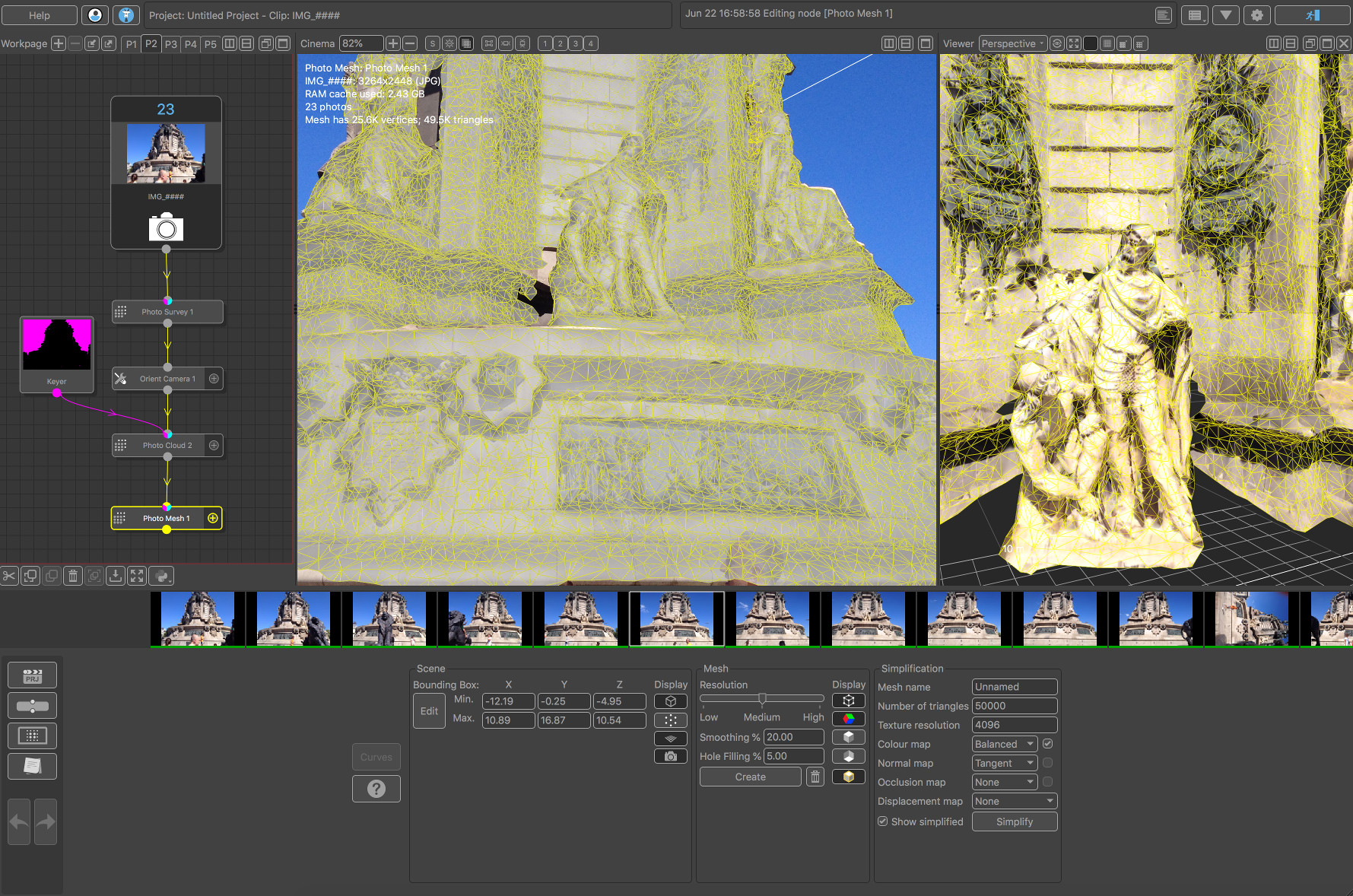 The bounding box of the mesh can be adjusted in the Viewer windows using the Edit button. This may correspond to the entire dense point cloud, or can be reduced to focus on a specific area of the scene if desired.

The images below illustrate the different results obtained using different mesh resolutions (all meshes in this case were generated from the same set dense point cloud). The meshes contain between 675K and 6.1M triangles, and finer details can clearly be seen as resolution increases. Note that depending on the depth map quality, increasing the mesh resolution to High may also mean noise is mistaken for detail when constructing the mesh.

The Smoothing control can be used to adjust the amount of smoothing that is used when generating the mesh. Increasing this value will generate a smoother mesh, which can be useful if the dense point cloud contain a significant amount of noise.

Once the mesh has been generated, it will be displayed in the Cinema and Viewer windows.

Simplifying and texturing the mesh

As part of the simplification process, a custom UV map is automatically generated and attached to the simplified mesh. Various types of texture map can be automatically extracted from the input images and high resolution mesh. These texture maps will be no larger in resolution than the value specified in the Texture Resolution edit box, and can be exported down-stream using the Scene Export node.

When a Balanced colour map is generated, the original input images will be exposure corrected and passed down-stream once the mesh simplification has finished, allowing them to be used for manual texture adjustments in the Texture Extraction node, or exported to other applications.

The image below illustrates the difference between a colour map captured from the original images, and the colour map obtained after balancing the exposure variations. In this case, the images were captured with auto-exposure enabled to help obtain an accurate set of depth maps.

Tangent space normal maps use either World or Tangent space. It is important to set this value correctly before simplifying the mesh, depending on how the asset will be used once exported.

Tangent space uses the standard Mikk tangent space to store the normal direction values. This is the same tangent system used in many realtime engines such as UnityTM).

World space normal maps store normal values in the world coordinate system. Applications such as MariTM by The Foundry Ltd. provide tools that can be used to convert world-space normal maps into their local tangent space.

Note that occlusion maps can be time consuming to generate, especially when the original high resolution mesh contains several million triangles, but will take full advantage of all available CPU cores.

Displacement maps can be generated as a full floating-point texture that contains positive and negative values indicating the amount of displacement along the surface normal in world coordinates. Alternatively, the displacement information can be normalised and stored as a grey-scale texture, where a grey value of 0.5 (in the range 0..1) indicates zero displacement. When generating a normalised displacement map, the absolute displacement scale is written to the application log, so it can be recorded and used elsewhere if required.

Current clip: The clip that is being displayed in the Cinema window.

Bounding Box Edit: Allow the mesh bounding box to be adjusted in the Viewer windows by clicking and dragging with left mouse button (hold the Control key to adjust the furthest face of the bound instead of the nearest face).

: Toggle display of the mesh bounding box in the Cinema and Viewer windows.

: Toggle display of the dense input point cloud in the Viewer windows.

: Toggle display of the ground plane in the Cinema and Viewer windows.

: Toggle display of the cameras in the Viewer windows.

Resolution: The resolution at which the mesh will be generated. Note that generating high resolution meshes will require significant amounts of system RAM.

Smoothing %: The amount of smoothing that is applied when generating the final mesh. Increasing this value will produce a smoother mesh, but may also remove fine details (default value is 20%).

Hole Filling %: The maximum hole size that will be filled, as a percentage of the overall mesh bound. Holes smaller than this threshold will be filled automatically during the mesh construction process (default value is 5%).

: Clicking this button will delete the mesh and the corresponding data file from disk.

: Toggle display of the mesh.

: Toggle shading of the mesh using lighting and surface normals in the Viewer windows.

Mesh name: The name of the mesh that will be passed down-stream after simplification.

Colour map: The colour map mode for mesh texturing. Options are None for no colour map; Original which will use the original images, or Balanced which will attempt to compensate for significant exposure differences between images, generating a more balanced overall colour map. The check-box will toggle display of the colour map on and off in the Viewer windows.

Show simplified: Toggle between displaying the original mesh and the simplified version.

Simplify: Start the simplification process and generate the specified texture maps. Note that a mesh must be simplified before it can be passed down-stream.

Unity is a trademark of Unity Technologies or its subsidiaries or affiliates.

Mari is a trademark of The Foundry Visionmongers Ltd.