The Stereo Render Node can be used to render stereoscopic left and right-eye views of the scene from depth maps generated up-stream, as well as analyse the range of disparities present in the stereoscopic image and estimate viewing comfort for each pixel in the image. 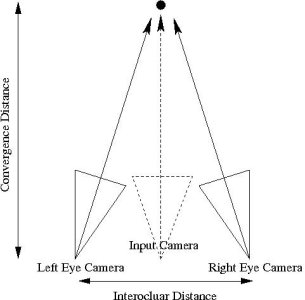 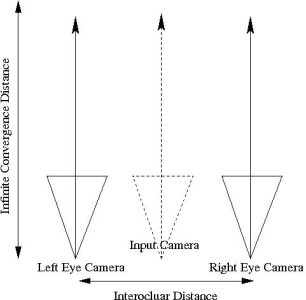 The Stereo Render node can render stereoscopic images in two ways: First of all the Display Mode menu can be used to select either Left-Eye, Right-Eye, Anaglyph Side-By-Side or Top-And-Bottom to display in the Cinema window. When displaying the red/blue anaglyph render in the Cinema window, the colour saturation of the input image can be controlled using the Saturation % parameter which can make viewing easier for scenes that contain a wide variety of colours.

Regions of the image that become exposed whilst rendering the left or right-eye views are in-painted automatically during the rendering process.

All exposed regions are first filled using spatial in-painting. The Edge Dilation and Edge Soften parameters can be used to control this. In situations where the exterior object boundary does not entirely cover the object, artefacts can occur when in-painting. By dilating the object depth map slightly, these artefacts can be reduced as shown in the image below.

The Edge Soften parameter can be used to soften rendered edges slightly at significant depth discontinuities. The difference in depth that must occur to trigger a depth discontinuity is specified by the Depth % parameter, as a percentage of the distance between the near and far camera planes. The image below shows how edge softening can improve the rendered output (in particular on the right-hand side of the actor's neck). 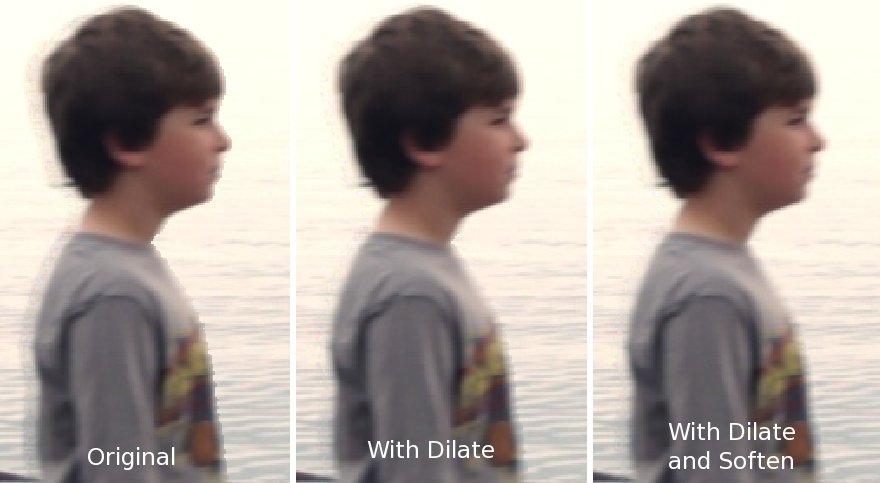 All pixel areas that are in-painted spatially can have a grain pattern rendered over them to reduce visible artefacts. The grain parameters are described in more detail below.

For example, in the screenshot below, the actor is walking from left to right, and when rendering the left eye image pixels on the left side of the actor's body are exposed and require in-painting. Because the stereo disparity in this shot is relatively large, the results of spatial in-painting can be seen relatively easily in the left-hand image. By enabling temporal in-painting, these pixels can be filled more accurately using colours from nearby frames, as shown in the right-hand image. 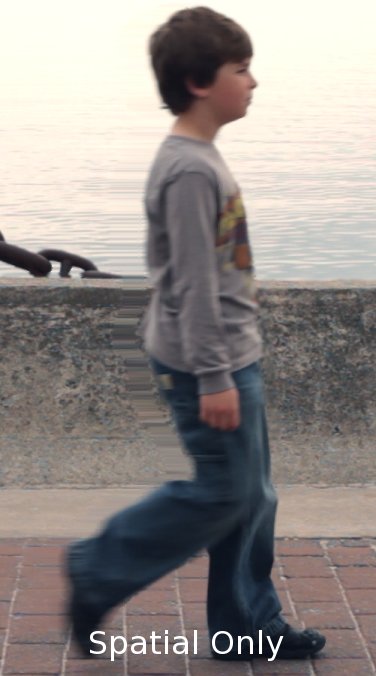 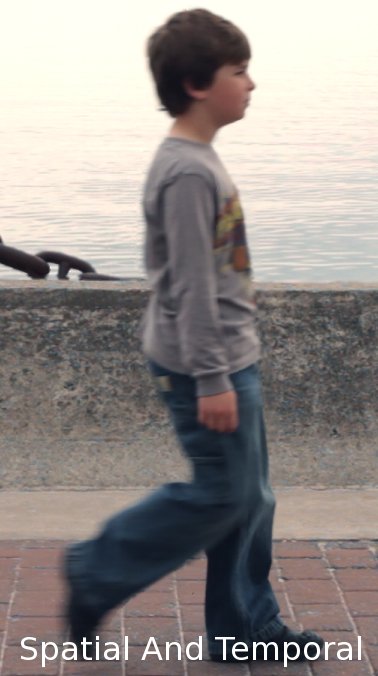 The Viewer Distance and Screen Width parameters should be set to the viewing settings for which comfort will be estimated. For example, if viewing comfort is to be estimated for a projection screen that is 15 feet wide, and an observer sitting 10 feet away from it, those values should be entered into the screen width and viewer distance edit boxes.

Enabling the Show comfort violations option will display a false-coloured image in the Cinema window, ranging in colour from green (comfortable viewing) to red (uncomfortable viewing). These values are estimated by assuming the observer's interocular distance is fixed at 65mm, and measuring the angle at which the observer's eyes must reach in order to fuse the stereoscopic image at each pixel depth. When the fusion angle exceeds a value generally assumed to indicate visual discomfort, the Cinema overlay is coloured red.

The images below illustrate how factors such as the convergence distance can affect viewing comfort for a scene. In the first image, the convergence distance is set so the left and right-eye cameras converge on the actor. The comfort overlay is shown inset at the bottom-right of the anaglyph image, and indicates that the entire image can be viewed comfortably.

When the convergence distance is moved towards the camera, however, the disparity values for the scene are greatly increased, and the comfort overlay turns red for most of the image. This indicates that the observer's eyes may have trouble fusing the stereoscopic image in the background of the shot.

In cases where viewing comfort exceeds allowable thresholds, the Disparity Scale and Disparity Offset rendering parameters can be used to artificially scale the disparity values to generate a comfortable image, or to offset the disparity values which has the effect of moving the entire scene forwards or backwards from the viewer relative to the display surface.

Interocular: The interocular distance (i.e. the distance between the left and right-eye camera views) used to generate the stereoscopic image.

Near plane: The near camera plane. The R button resets incoming value.

Finally, convergence can also be adjusted interactively in a Viewer window by holding the Control key and clicking and dragging with the left mouse button.

Lookahead: The number of frame ahead and behind the current that will be used to in-paint occluded regions. Note that for temporal in-painting to perform best, the path of the camera must be tracked in 3D space because in-painting relies on knowing the camera position for each frame to determine which pixels can be used to fill holes. Increasing this value will mean holes can be filled using data from more distant frames, but will also increase the time it takes to render each frame. Setting this value to zero will mean no temporal in-painting is performed.

Step: The frame step for each lookahead frame. Increasing this value can be used to increase the range of frames used for in-painting without impacting too severely on rendering time. For example, if lookahead is set to 3 and step is set to 1, in-painting frame 10 will use data from the three frames on either side of frame s10 (i.e. frames 7, 8, 9, 11, 12 and 13). If step is set to 2, each lookahead will be doubled, so it will use data from frames 4, 6, 8, 12, 14 and 16. This means the renderer can take data from more distant frames without increasing the number of frames that must be processed.

Edge Dilation: The number of pixels by which the depth map will be dilated before edge in-painting occurs. This can be used to decrease halos around object edges in situations where the depth map is not covering the entire object.

Edge Soften: The amount of softening that will occur along edges that contain significant depth discontinuities which can often cause aliasing artefacts when rendered. The Depth % parameter specifies the relative difference in pixel depth (as a percentage of the distance between the near and far camera planes) that is considered to be a depth discontinuity.

Disparity Scale: The scale factor applied to all pixel disparities during rendering. This can be used to artificially increase or decrease the stereoscopic effect. When enabled, C button indicates that the disparity scale factor is constant throughout the entire clip instead of being allowed to vary from frame-to-frame. When the C button is switched off, the disparity scale curve is available for editing in the Curves Editor.

Disparity Offset: The offset applied to all pixel disparities during rendering. This can be used to artificially move the perceived position of the scene forwards and backwards compared to the viewing surface (i.e. the computer monitor or projection screen). When enabled, C button indicates that the disparity offset is constant throughout the entire clip instead of being allowed to vary from frame-to-frame. When the C button is switched off, the disparity offset curve is available for editing in the Curves Editor.

Red, Green, Blue Grain: The size and intensity of the grain pattern that will be applied to areas that are spatially in-painted. The size represents the approximate size (in pixels) of each grain element, and the intensity percentage represents the amount of colour variation introduced into the image by the film grain.

Gang RGB: When enabled, adjustments to the grain parameters in a single colour channel will be applied to the other colour channels. 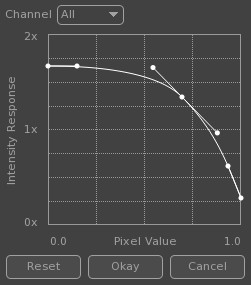 The horizontal axis corresponds to pixel value, and the vertical axis to intensity response. By default, the profile is a horizontal line, which means that dark and light pixels use the same amount of grain, corresponding exactly to the parameters. The response can be adjusted so that darker or lighter pixels can use more or less grain as required. Drag the control vertices around with the left mouse button to edit the curve.

Viewer proxy: The resolution used to display the triangular mesh in Viewer windows. For high resolution images, selecting Half, Third or Quarter will increase rendering performance.

Transparency: The amount of transparency that is used to display a grey-scale depth map in the Cinema window.

Saturation %: The colour saturation applied when rendering a stereoscopic anaglyph in the Cinema window. Reducing this to zero will render a red/blue anaglyph using grey-scale images for the left and right eyes.

Depth cut %: The difference in depth values (as a percentage of the distance between the near and far camera planes) at which triangular mesh edges will be cut when displaying the depth map in Viewer windows. Note that this option is for display purposes only and does not affect the depth map being passed down-stream from the node.

Show disparity histogram: When enabled, a graph showing the frequency of different pixel disparities will be displayed at the right-hand edge of the Cinema window.

Log scale: When enabled, the disparity histogram graph will be displayed using a logarithmic scale.

Render stereo display: When enabled, the left and right-eye renders will be displayed on the secondary stereo display screen if one is available.

Cache Z-Depth from upstream: When enabled, z-depth data from up-stream will be cached in the Stereo Render node. This can be useful in situations where z-depth data takes a significant amount of time to calculate. By enabling this option, the data will be cached locally and used to accelerate the rendering process whilst rendering parameters are adjusted. Note that enabling this option will reduce the amount of RAM available for caching rendered stereoscopic image data.

Viewer Distance: The viewer distance used to estimate stereoscopic viewer comfort. This is the distance between the display screen and the observer who is viewing the screen.

Show Comfort Violations: When enabled, the Cinema window will display a coloured overlay that approximates how comfortably the stereoscopic image can be viewed by an average viewer. The overlay colours can vary from red in regions that are uncomfortable to view, to green in regions that can be viewed comfortably. The size of the display screen and the distance between the screen and observer must be set using the Screen Width and Viewer Distance edit boxes.

FBX is a registered trademark of Autodesk Inc. in the USA and other countries.