Note: this is an experimental node intended for use with depth maps captured by an external depth-sensor device. The Pixel Farm's PFCapture iOS app is available from the Apple iOS app store for capturing such data with an iPad, and is compatible with the Occipital Structure Sensor.

This node can be used to generate a triangular mesh from a tracked camera and sequence of depth maps. The triangular mesh is generated at a specific voxel resolution, defined in real-world units. It is therefore important to ensure your camera path and depth maps are defined at the correct scale. This can be achieved automatically by using The Pixel Farm's PFCapture iOS app and an Occipital Structure Sensor to record the depth data, and the Attach Z-Channel node to combine the RGB and depth clips into a single image stream.

The following tree shows an example of how the Z-Depth Mesh node can be used to in combination with the Attach Z-Channel node to import z-depth data generated by The Pixel Farm's PFCapture iOS app.

An Auto Match and Camera Solver node are used to generate tracking points with a z-depth value at each frame, read from the depth maps attached to the clip: 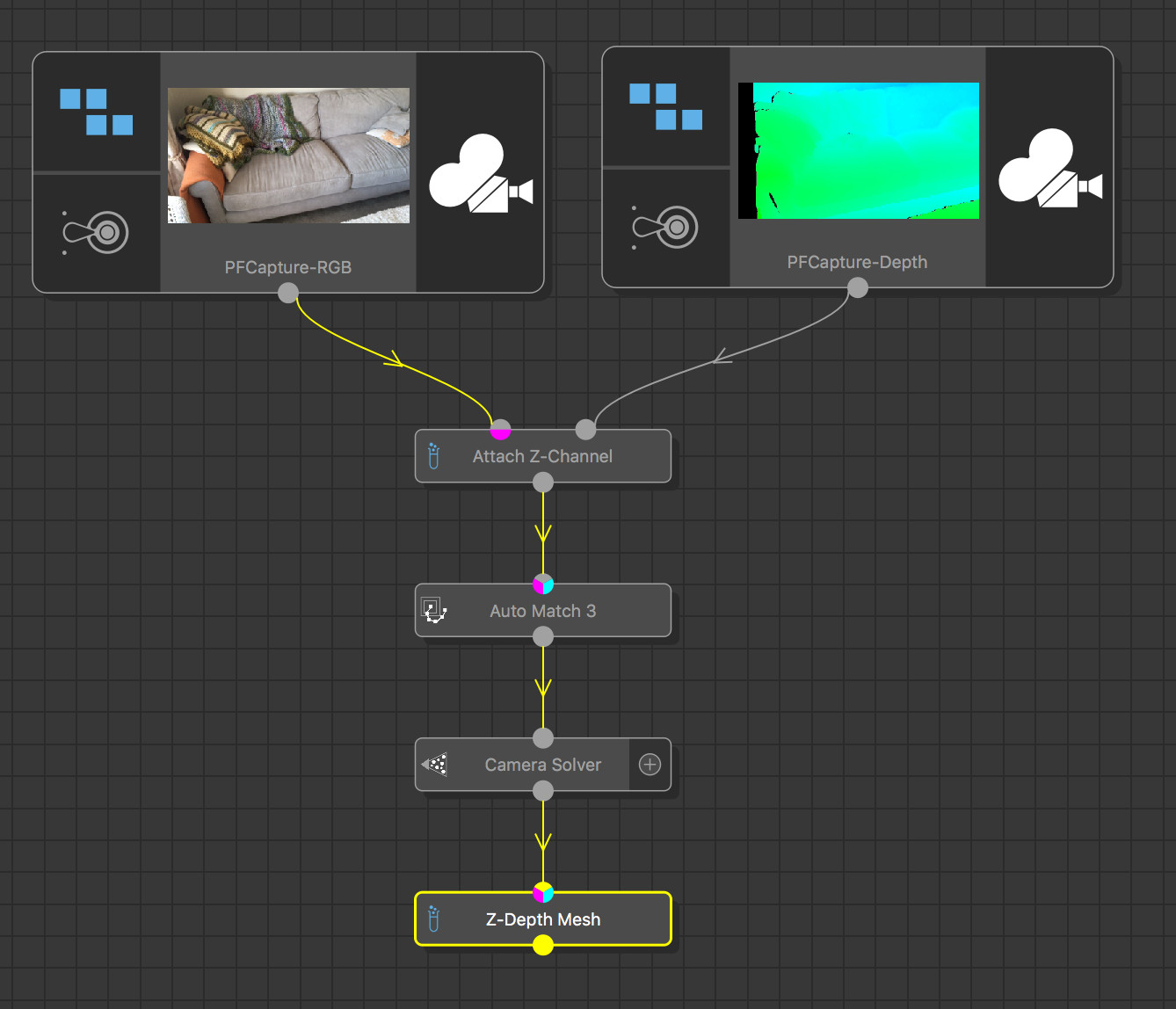 Because z-depth data is now available, a z-depth value will be assigned to each tracker in each frame, and used by the Camera Solver node to help track the camera. This will also set a real-world scale according to the units used to define depth in the z-channel input clip. Additional metadata recorded by PFCapture will also be used to correctly orient the camera.

Lastly, the Z-Depth Mesh node is attached. This node uses the camera motion provided by the Camera Solver node to combine z-depth data from each frame into a triangular mesh, as shown below:

In order to reconstruct a mesh, the overall bound of the scene must first be set. This is achieved by clicking the Edit Bound button and adjusting the bounding box in the Viewer windows using the left mouse button.

Then the Voxel Resolution menu should be set to specify a suitable resolution for the mesh. Note that the amount of memory and time required to build the mesh will be significantly increased for very small resolution voxels. The total number of voxels that will be used during reconstruction is shown in the Cinema window, and this is calculated from the size of the bound and the voxel resolution setting. Voxel counts above 1000 in all directions may take a significant amount of memory and processing time to generate.

Once the initial mesh is built, it will be simplified if necessary to a maximum number of triangles specified in the Max. Triangle Count edit box, and a UV map will also be generated. The mesh will be passed down-stream for further processing. Note that meshes with very high triangle counts are likely to decrease performance of down-stream nodes and increase memory usage significantly.

If texturing is required, a Texture Extraction node can be attached down-stream.

Alternatively, if PFCapture is not being used, the Z-Depth Solver node can also be used after tracking the camera to generate depth maps: 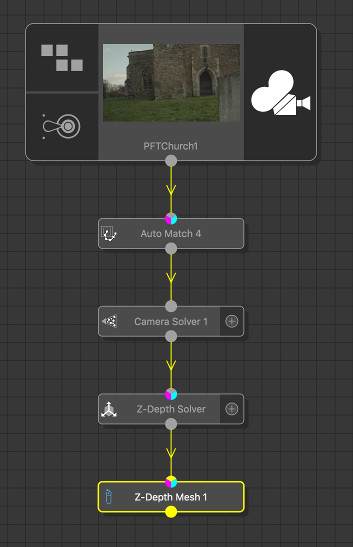 These can be combined into a mesh using the same process described above.

Voxel Resolution: The voxel resolution used to generate the triangular mesh, assuming one world unit corresponds to one metre. As this value is adjusted, the actual voxel resolution contained within the scene bound is displayed in the Cinema window.

Max. Triangle Count: After the mesh is generated, it will be simplified to this number of triangles if required before the UV map is generated.

Start: Start the process of converting depth maps into a triangular mesh, using the current scene bound and resolution parameters. Conversion will start from the current frame, and continue forwards towards the end of the clip or until the Stop button is clicked in the progress window.

Clear: Delete the mesh and remove the data file from disk.

Transparency %: The amount of transparency that is used to display a grey-scale depth map in the Cinema window.

Depth cut %: The difference in depth values (as a percentage of the distance between the near and far camera planes) at which triangular mesh edges will be cut when displaying the depth map in Viewer windows. Note that this option is for display purposes only and does not affect the depth map being passed down-stream from the node.

Show mesh: When enabled, the 3D mesh will be displayed.

Show mesh colour: When enabled, the 3D mesh will be displayed with captured vertex colours.

Show trackers: When enabled, the solved tracking points will be displayed in the Viewer windows.

Show geometry: When enabled, the geometric mesh objects will be displayed in the Viewer windows.

Show frustum: When enabled, the camera frustum and path will be displayed in the Viewer windows.

Show bound: When enabled, the scene bound will be displayed in the Viewer windows.

App Store and iPad are trademarks of Apple Inc., registered in the U.S. and other countries.

Structure is a trademark of Occipital, Inc., registered in the U.S.